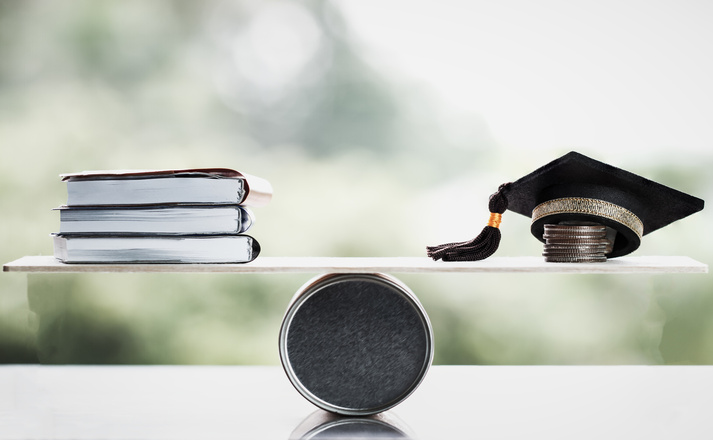 Students who graduated from college in 2018 walked away with more than a diploma: 69 percent of them took on an average debt of $29,800. About 14 percent of parents also accrued student debt – to the tune of $35,600 in federal Parent PLUS loans.

Well, getting a college degree ensures a good job, right? Not so fast. A report issued by Burning Glass and the Strada Institute shows that 43 percent of recent graduates are underemployed in their first job out of college. That means their earning potential is lower than expected, which means their ability to reasonably pay back their student loan debt is reduced. But wait – of that 43 percent of graduates, two-thirds find themselves in the same predicament five years after graduation, and more than half are still unemployed after 10 years. Chances are that one of 10 people who find a first job that pays appropriately, will be underemployed after five years.

What’s wrong with this picture? Plenty. How to fix the broken student loan system is a question yet to be answered.

The times, they are a changin’

The cost of higher education today is not what it once was. In the 20 years between 1995 and 2015, things changed dramatically. A Yahoo! Finance report shows that student debt has risen faster than income. Income rose only 2.4 percent, but debt skyrocketed 78.1 percent. This tremendous disparity may be contributing to the default rate of borrowers. Researchers at New York’s Federal Reserve Bank discovered that 26 percent of those who completed their education in 2009 with debt defaulted at some point. At least 37 percent of 2009 graduates have been delinquent on repaying their loans. America’s student loan program simply does not work.

In her brief on the broken student loan system, Professor Joni E. Finney of the Wharton School, University of Pennsylvania, states that we have the best 20th century model for financing education. The problem is that this is the 21st century, and the model for public financing of higher education is outdated.

Families are challenged with having to pay costs for education, while struggling with rising costs of living that are greater than their income growth. By 2020, for our economy to remain competitive, it will require that 65 percent of individuals have post-secondary credentials. However, students are coming from more diverse backgrounds and often from families with modest incomes. All they can do is take out more student debt.

What to do about an unsustainable higher education finance system

Several plans are being introduced, from “free college for all” to new models that shift the burden from students and their families to more of a shared responsibility with the institutions themselves. Dr. Finney offers suggestions for repairing the failing system:

Another experimental education finance model is an Income Share Agreement (ISA). Tony James, a Blackstone billionaire, came up with the idea that proposes that in exchange for higher education, students agree to pay back a certain percentage of their income for a set number of years. This means that their overall student loan program obligation adjusts with their income. The premise is that it:

An ISA can be a good option for anyone – even for those who are not as successful as they had hoped to be. It can reduce stress levels because it’s adjusted to income. If a graduate had to take a job as a barista, the repayment is within that salary range. Likewise, if the graduate is not underemployed and earns more, his or her payment is adjusted to income.

An ISA is not the same as an IBR (Income-Based Repayment) plan that is offered by the government. Loan repayment amounts are based on your income, but there are stipulations. As long as you make 20 years’ worth of on-time payments (25 years’ worth if you took out the loan before 2014), any outstanding debt after that time will be forgiven. Payment amounts are recalculated annually, based on 10 percent of your discretionary income for loans taken out after 2014 and 15 percent for loans taken out before that. If your income remains low over 20 or 25 years or you expect your family size to grow, it may be a viable option.

The Standard Repayment Plan is a student loan program that requires a set monthly payment made for 10 years and is based on the amount of student debt incurred. If a student is underemployed, he or she still has to pay the required dollar amount, regardless of income.

The bottom line is that higher education isn’t always providing value for education. The price of an education is affecting the economy because young people today are not able to buy homes. Their student debt, in some cases, is their 30-year mortgage. This begs the question: Are colleges more interested in providing an affordable, quality education, or are they more focused on maximizing revenue from tuition and putting together a list of high-profile donors?

Perhaps higher education institutions need to re-evaluate their admission practices. Maybe they should assume some of the debt if a borrower defaults on his or her loan. At the very least, they could help potential students make informed borrowing decisions.

Outstanding student debt stands at $1.4 trillion in the United States. We have a broken student loan system that desperately needs to be fixed. In the meantime, what is the alternative?

Right now, there’s a shortage of skilled trades workers, from CDL drivers to HVAC technicians and welders. The Bureau of Labor Statistics says that by 2022, one-third of new jobs will be in construction, healthcare, healthcare support or personal care. Most do not require a four-year college degree. Some fields require as few as three weeks of training – certainly not the four years needed for a bachelor’s degree – and some pay $50,000 to start.

For information about how colleges and universities can exceed their goals through training, marketing, and pre-enrollment advising contact Norton | Norris, Inc.